Technological behavior of the last Neanderthal
and first Sapiens in Italy Simplified scheme of the cognigrams: A) Production of Levallois convergent flake in the Mousterian from Oscurusciuto SU 14. B) Production of an unstandardized flake using bipolar technique on anvil in the Uluzzian from Castelcivita rsa“. Graphic: Giulia Marciani. ROCEEH_Newsletter_20-2022 Schematic representation of the peopling of Eurasia through repeated waves of expansion from an out of Africa population Hub (grey-shaded area, precise location is not known); the red arrows represents the expansion associated with Initial Upper Paleolithic material culture and the blue arrows the expansion associated with Upper Paleolithic assemblages. Kya= kylo years ago. CREDIT Leonardo Vallini, Giulia Marciani

The ancient human remains unearthed in the Bacho Kiro cave (in present-day Bulgaria) and recently genetically described were surprisingly reported to be more closely related to contemporary East Asians than contemporary Europeans. Several scenarios were proposed to account for the finding, but this puzzling result so far raised more questions than answers concerning the underlying ancient population movements that could explain the presence of genetically East Asian individuals in Europe ~45.000 years ago.

A study published in Genome Biology and Evolution attempted to solve this mystery, by putting those individuals in the wider context of Eurasian Palaeolithic human genomes and co-analysing genetics and archaeological evidence. The study was led by Leonardo Vallini and by Prof. Luca Pagani, from the University of Padova in collaboration with Dr. Giulia Marciani and Prof. Stefano Benazzi from the University of Bologna, Italy.

In the scenario put forward by the authors, the colonisation of East and West Eurasia was characterised by several events of expansion and local extinction from a population Hub, where the ancestors of all Eurasians thrived after they first ventured out of Africa ~70-60 thousand years ago.

An early, failed Homo sapiens expansion took place sometime earlier than 45 thousand years ago. The only representative of that migration, that is related to neither modern Europeans nor to modern Asians, has been recovered from Zlatý kůň, in present day Czech Republic and it is yet unclear how widespread it was.

“Then, around 45 kya, a new expansion emanated from the Hub and colonised a wide area spanning from Europe to East Asia and Oceania and is associated with a mode of producing stone tools known as Initial Upper Paleolithic” says Leonardo Vallini, first Author of the study.

The fate of these settlers was different in East Asia and in Europe: while in the former they endured and ultimately led to the formation of the modern populations of East Asia, the European representatives of this expansion declined and largely disappeared, leaving the Bacho Kiro, the elusive Oase individual from Romania and a few other remains as the only witness of this early peopling of Europe.

“It is curious to note that, around the same time, also the last Neanderthals went extinct”, says Giulia Marciani, from the University of Bologna and coauthor of the study.

“Finally, one last expansion occurred sometime earlier than 38 kya and re-colonized Europe from the same population Hub, whose location is yet to be clarified”, summarises Luca Pagani, senior author of the study. “Although even in Europe there were occasional interactions with survivors of the previous wave, an extensive and generalized admixture between the two waves only took place in Siberia where it gave rise to a peculiar ancestry known as Ancestral North Eurasian, which eventually contributed to the ancestry of Native Americans”.

This migration is associated with a different cultural assembly named Upper Paleolithic, which characterises the main European palaeolithic sites. “It is noteworthy that, from a cultural perspective, these novel stone tools have often been depicted as an independent assembly rather than a local development of pre-existing technologies in Europe: it is refreshing to see that genetic and cultural information can be reconciled under a comprehensive scenario”, concludes Telmo Pievani, from the University of Padova and coauthor of the study.

The authors conclude that further efforts should be directed into clarifying the geographic whereabouts of the Hub, and to identify both the internal and external causes underlying these ancient population movements, as well as the associated cultural dynamics.

“Genetics and material culture support repeated expansions into Paleolithic Eurasia from a population Hub out of Africa”  Biology Genetic and Evolution. DOI: 10.1093/gbe/evac045

The “Cultural Heritage project. Our Roots, our Future” intends to highlight the virtuous interaction between training, research and production through the research and teaching activities of four universities in Emilia Romagna: Bologna, Ferrara, Modena e Reggio, Parma which are conducting courses focused on the enhancement of cultural heritage through new technologies.

UNIVERSITY OF BOLOGNA: PROJECTS
The earliest migration of Homo sapiens in southern Europe:
understanding the biocultural processes that define our uniqueness

The Project is going to produce the following outcomes:

Results obtained from Southern Europe will be crucial for understanding the Middle-to-Upper Paleolithic Transition in the rest of Europe and developing a statistical model of cultural change that can be applied to other regions to generate testable hypotheses, ultimately providing an example for future integrative scientific studies in the field of human evolution. 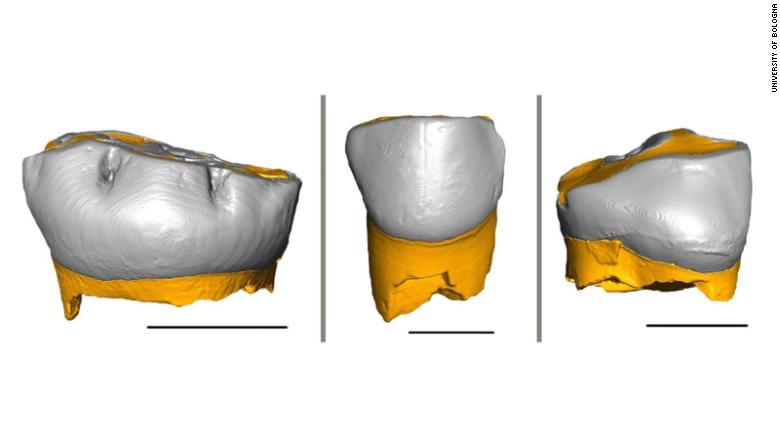